Saturday in Stellenbosch, Idas Valley, you can hear excited voices in the near distance, loud music and now and then the sound of a whistle. If one expects to see now netball or soccer, one will be surprised: The first ever PLAY HANDBALL Junior Cup took place on Saturday, the 24th February 2018 from 9am to 4pm in Stellenbosch. The Bruckner de Villiers Primary School hosted the event on their netball sportsground. The handball youth tournament for U14 Mix teams was organized by the volunteer Carolin Held and the Play Handball ZA-coordinator in the community, Adri Katts, in conjunction with the community of Idas Valley.

Caroline Held is a German volunteer that came with the organization PLAY HANBDALL ZA (www.play-handball.org) to South Africa to assist the schools and the community of Idas Valley with the development of the team sport handball. She supports the Bruckner de Villiers Primary School in physical education five times a week and as well organizes afterschool programmes for the community. Caro’s aim is beside the development of handball to use the sport to support social cohesion and inclusion. At the first ever PLAY HANDBALL Junior Cup in the area of Stellenbosch ten teams from different backgrounds and communities joined on the handball field. At ten o’clock two teams from Lavender Hill and Idas Valley, one from the German School Cape Town, Franschhoek Valley Community Sports Centre, Kayamandi, Mannenberg, Ottery and Delft where on the court, or better, on pavement-Netball-fields, which were a good substitute.

The mix teams, consisting of girls and boys, contest the first group matches until lunch break. Very surprised by some of the teams, one could see that everything was possible in this tournament. At the end of the preliminary round, the ranking was determined within the three groups and everybody was preparing for the final round. While that, the interim rain was more blessing then interfering the good mood. As refreshment everyone got a packed lunch and music to keep their legs warm. Not all of the teams were keen to have a break and instead a few friendlies were held in the fields. Many people from the Idas Valley community joined in the games and became more curious about its rules over the day.

Last strength and double ambition brought everyone even more pleasure in watching in the final rounds. Especially when the community derby, Idas Valley Primary vs. Bruckner de Villiers Primary, started, which the first team won. In the final games; Mannenberg loses in a thrilling game while throwing penalty against Ottery and Franschhoek wins against the Makapula Highschool Kayamandi and thus wins the tournament. At the end of the day, we look in tired faces, not unknown anymore, tired but satisfied. Goal achieved.

For Caro it was an exciting, demanding and successful day and not only about the sport: “It was important for me to get the community more connected to handball and through all the helping hands I had, I realized, that they definitely stand behind all this! Handball is a team sport“. 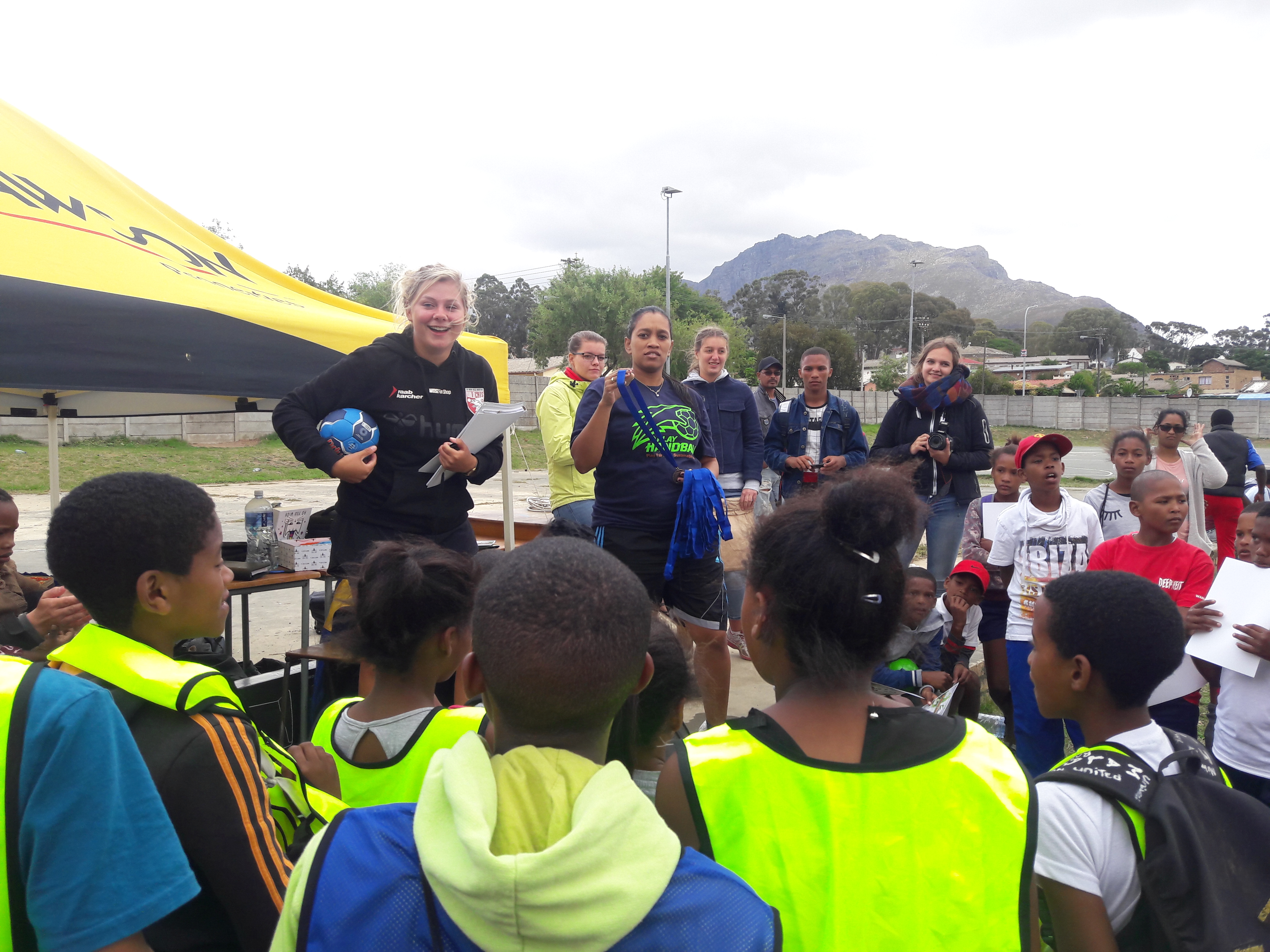 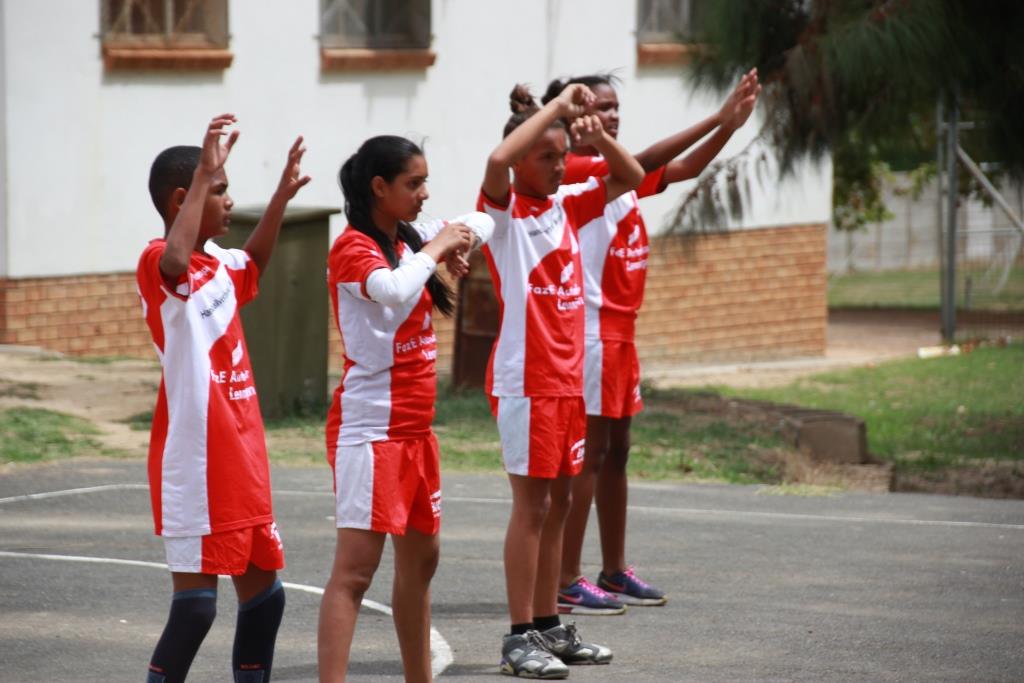 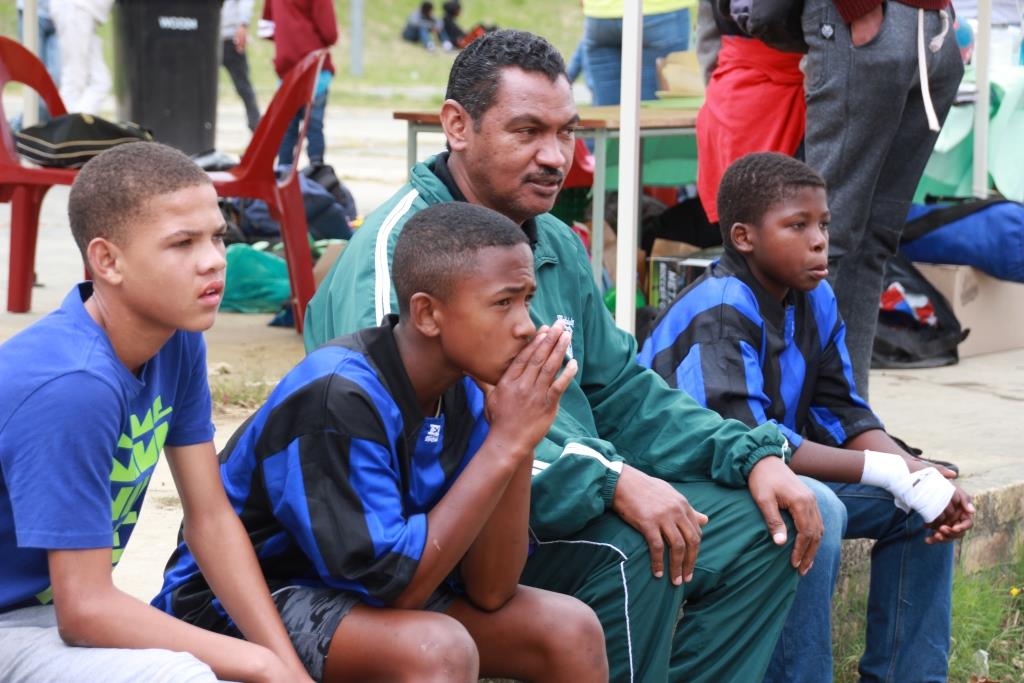 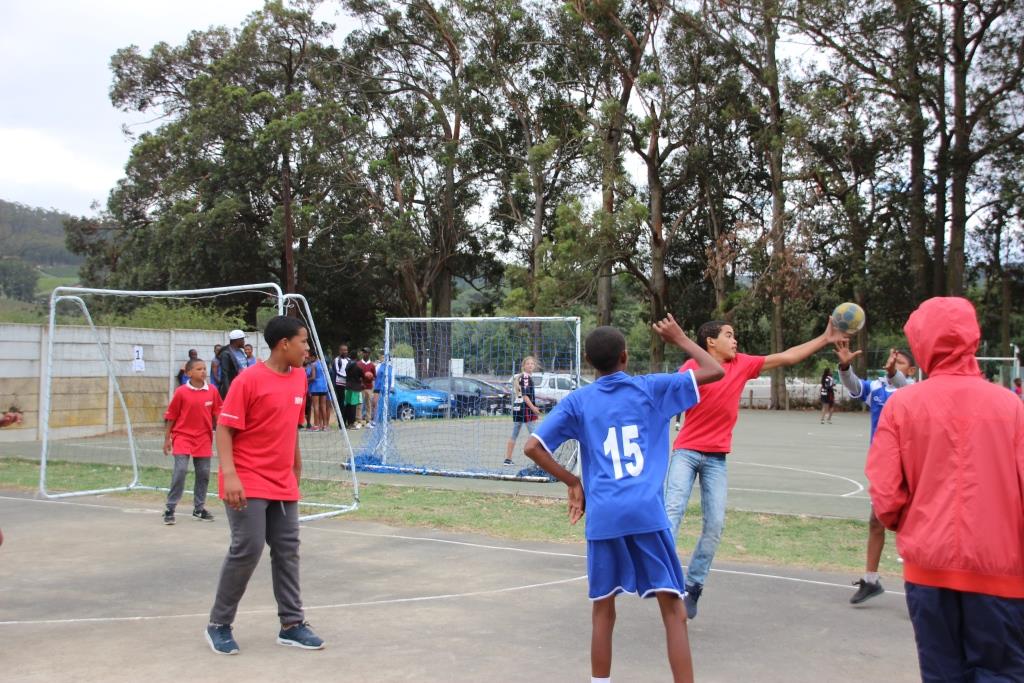 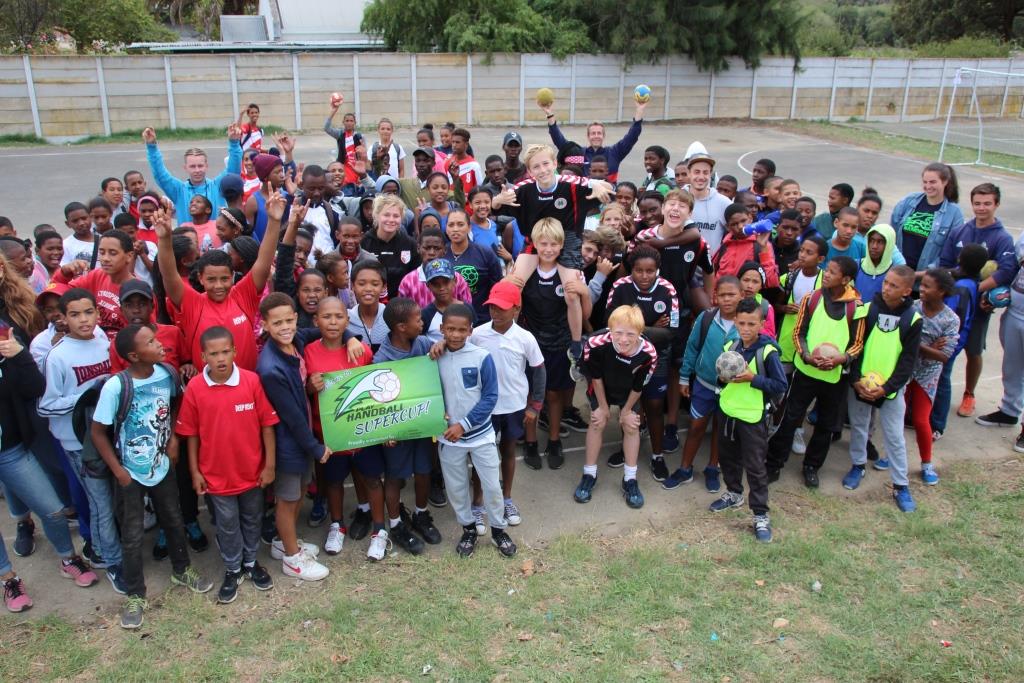 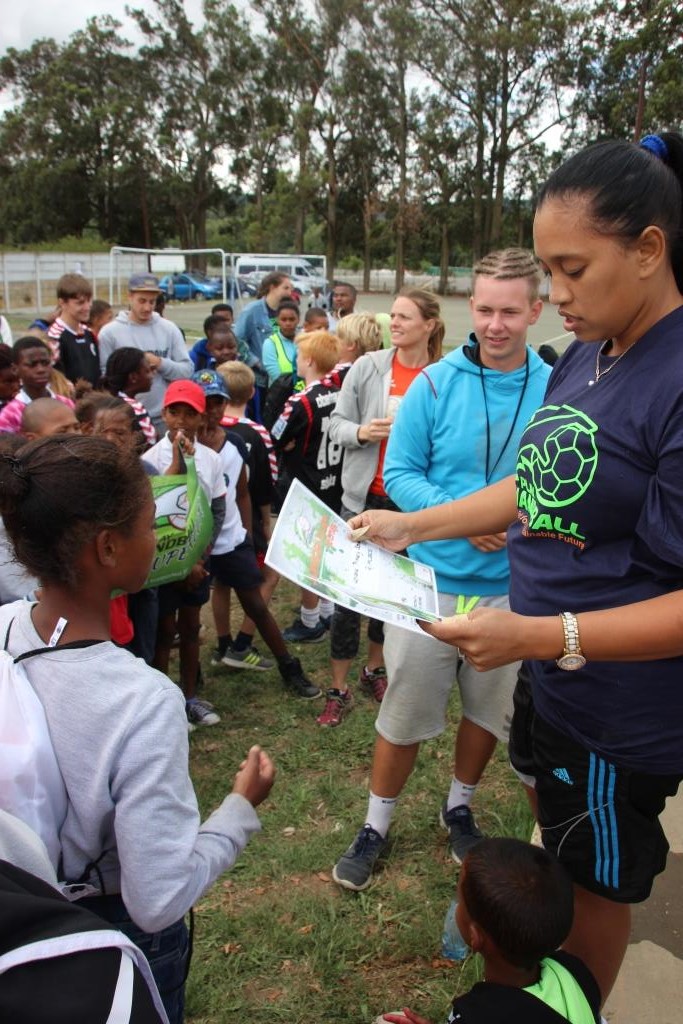 More in this category: Lars tells of his experiences as a volunteer in Darling » Kick-off-Weekend of the Trilateral Youth Coaches Exchange » Re-launch of the Weltwärts Volunteer Program in Kenya and South Africa. » Handball is growing in Kisumu County – 17 teams at first county tournament in by EmpowerGirlsPlus » Community Talk with Louise Barends from Darling Outreach Foundation in South Africa » Online Talks “Handball without Borders” » Play Handball Corona Aid helps over 1000 people in South Africa and Kenya. » PlayHandball’s first Online Course offers opportunities for learning and interaction. » Midterm-Seminar and Partner Meeting » Take action for the future – the 4th SuperCup in Cape Town inspires 150 kids to take action for climate change » Hanna reports from her experiences in 2 different communities around Cape Town » Press Release – Play Handball SuperCup 2019 in Cape Town » Laura tells of her experiences as a volunteer in Cape Town » From Blomberg to the Cape – As volunteer coaches in South Africa » Meet The Volunteer: Sophia experiences township life in Jo’burg » “I am, You are, We are South Africa!” – Ubomi Children Camp July 2019 » Interview with our Swiss volunteer Daniel Schettler » Handball is an universal language – Play Handball at Karookop Primary School » Interview with Thabang from Franschhoek Community Sport Centre » Supercup inspires over 450 children in Africa » With Handball active for a climate change – Play Handball Supercup 2018 in Delft, Cape Town » Play Handball Supercup 2018 in Benoni » Super handball action at the Sinaba Stadium in Daveyton » Karibu Kenya! Play Handball Supercup in Kisumu » Handball for UNSDG13 Climate Action – Workshop & Clean-Up » Donation Campaign of Kim Ekdahl Du Rietz brings about 30 000 Euro » Interview with the volunteer Matti Schubert » Learners embrace new sport » Handball is a new sport in the farming area of Piketberg » VOLUNTEER INTERVIEW with SIMON UTTKE » Get your own Calendar of “Memories of Joy and Unity with Handball” for your donation of 25€ and more » Conclusion ‘Play Handball’ 2017 » Using Sport to raise awareness for Climate Change! » Interview with Michael Haaß (HC Erlangen, World Champion 2007) – “Handball and Sport in general open doors for your life.” » PLAY HANDBALL starts in Kenya in 2017 » The 1st climate-neutral handball tournament series in South Africa » PLAY HANDBALL SuperCup on the 29th of October 2016, in Johannesburg and on the 19th of November in Cape Town, » PLAY HANDBALL SuperCup on the 24th of April 2016 at the German International School in Tamboerskloof, Cape Town. » STREET UP YOUR HANDBALL – Developing communities around South Africa with and through handball » SolarWorld powers Handball in South Africa » THE START OF A NEW HANDBALL VOLUNTEER PROGRAM » GIRLS HANDBALL DAY – TRAIN WITH THE PROS PROMOTING fun, health, passion and multi-cultural cohesion » Halftime for the handball development project of the German Olympic Sports Confederation in partnership with the South African Handball Federation in the Western Cape » Partnership for handball development between Germany and South Africa: Short-term handball development project financed by means of German Federal Foreign Office »
Previous Post VOLUNTEER INTERVIEW with SIMON UTTKE
Next Post Handball is a new sport in the farming area of Piketberg