Carol Nange went to Germany to attend a conference for youth exchange programmes organised by the German Sports Youth. She was meeting there with the local Handball Federations and our exchange partner Youth Abroad in Schleswig-Holstein. Finally, she also experienced professional handball in Berlin.

Carol works for Play Handball Kenya (PHKE) as a coordinator and is helping with managing the administration, finances, operations and the equipment for the organisation. In addition, she coordinates and supports the mobilisation of resources, the volunteer placement as welll as networking with schools and community-based organisations. Her main goal is “to make handball famous in schools and in the community around, while using its value for social and attitude change amongst young people on the environment and their lives.” In Germany she got Handball to know from the inside.

She visited Germany to attend the “German Africa Partnership Matching Conference” organised by “German Sports Youth” (Deutsche Sport Jugend, DSJ) in partnership with “Weltwärts”. At the same time, she created new partnerships and strengthened existing ones for Play Handball. All of this was a great experience for Carole and she learned a lot. “One of the biggest challenges was the weather”, she explain. “I thought that I will not get used to the cold weather, but to my surprise, only the outside world was cold but when you get inside – it was very warm”. And not only the weather was a pleasant surprise. ”I was so amazed – even without being told by anyone – by the look of how the buildings are structured, the traffic lights, the respect for time and the do-it-yourself attitude. All this was enough to show me that this is a country of law and order. The transport system was so efficiently good. Still, it gave me a headache at first. However, with Marie’s help, I can now say I am well informed on how it works. Travelling from Frankfurt via Cologne, Hamm, Hamburg and to my final destination Berlin, I felt more like a tourist, although I had very important meetings in between the trips.”

And the journey continued in Berlin, where Carole met Martin, head coach of the male youth team from the Füchse Berlin. “On Wednesday I welcomed Carol in the Olympicpark in Berlin. There I supported a comercial shoot from the DKB with the German national players Uwe Gensheimer, Paul Drux und Jannik Kohlbacher.” For Carol all of this was an astonishment: “I was picked up by Max and after a nice afternoon he took me to the Olympic Stadium in Berlin where I met my host Martin Berger. He told me I was going to see a commercial shoot. To my surprise, I had the unique opportunity to meet the best of the best in German handball. Not to mention the superstars Uwe Gensheimer, Paul Drux and Jannik Kohlbacher. I was so excited, happy and at the same time astonished. How did that happen? I was so humbled to see how polite they were, I felt honoured.” 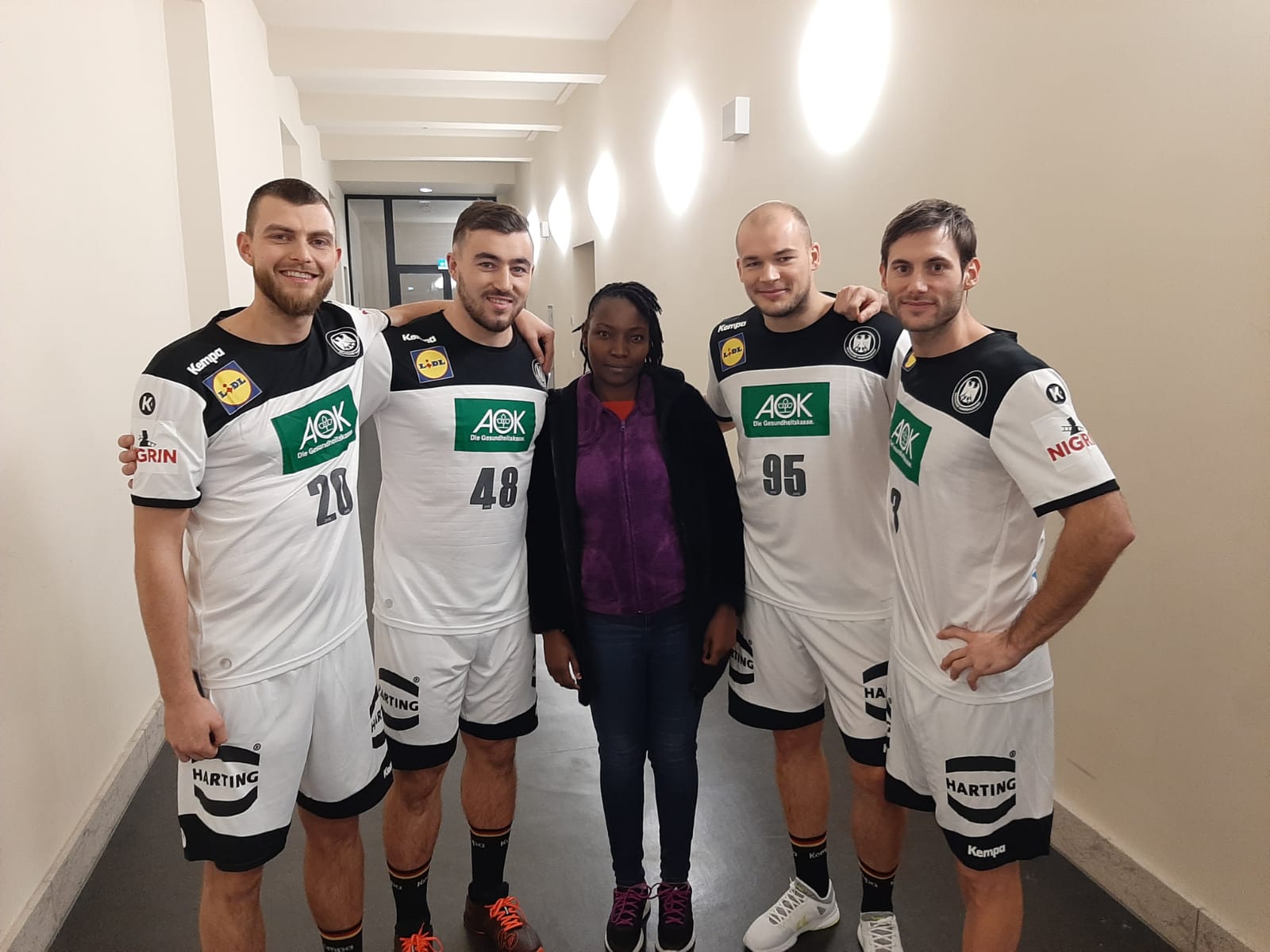 On Thursday morning, Carol and Martin visited the Trainingcenter from “Füchse Berlin”, where the watched the athletic Training and Carol observed as well Martins training. Martin gave Carol also some tips for the structure of her handball training. An highlight was the Bundesliga game between Berlin and Melsungen. Although Carol is coordinating Play Handball in Kenya, she has never seen a professional handball match: “When we arrived at the stadium the arena was packed, the atmosphere and the vibe were electrical. Magic was all-over the stadium where we experienced an impressive contest between the teams from Berlin and Melsungen”, sayes Carol impressed.

On Friday, a game from Martin’s Handball Team took place in Potsdam. After a long day full of sightseeing Carol got the oportunity to play handball with former volunteers. Then on Saturday after one last breakfast, it was time to say goodbye. Martin is looking forward to See Carol again when he is travelling around the world with the project “Handball inspiriert”: “Carol has a nice attitude towards sport and I hope she takes a lot of inspiration and ideas for her work to Kenia. I am happy to visit her soon”. And for Carol it was just an incredible and inspiring experience: “I made new friends and got to experience life in Germany. I feel so grateful to all those who made all of that possible. It was such an eye opening and intoxicating experience.” 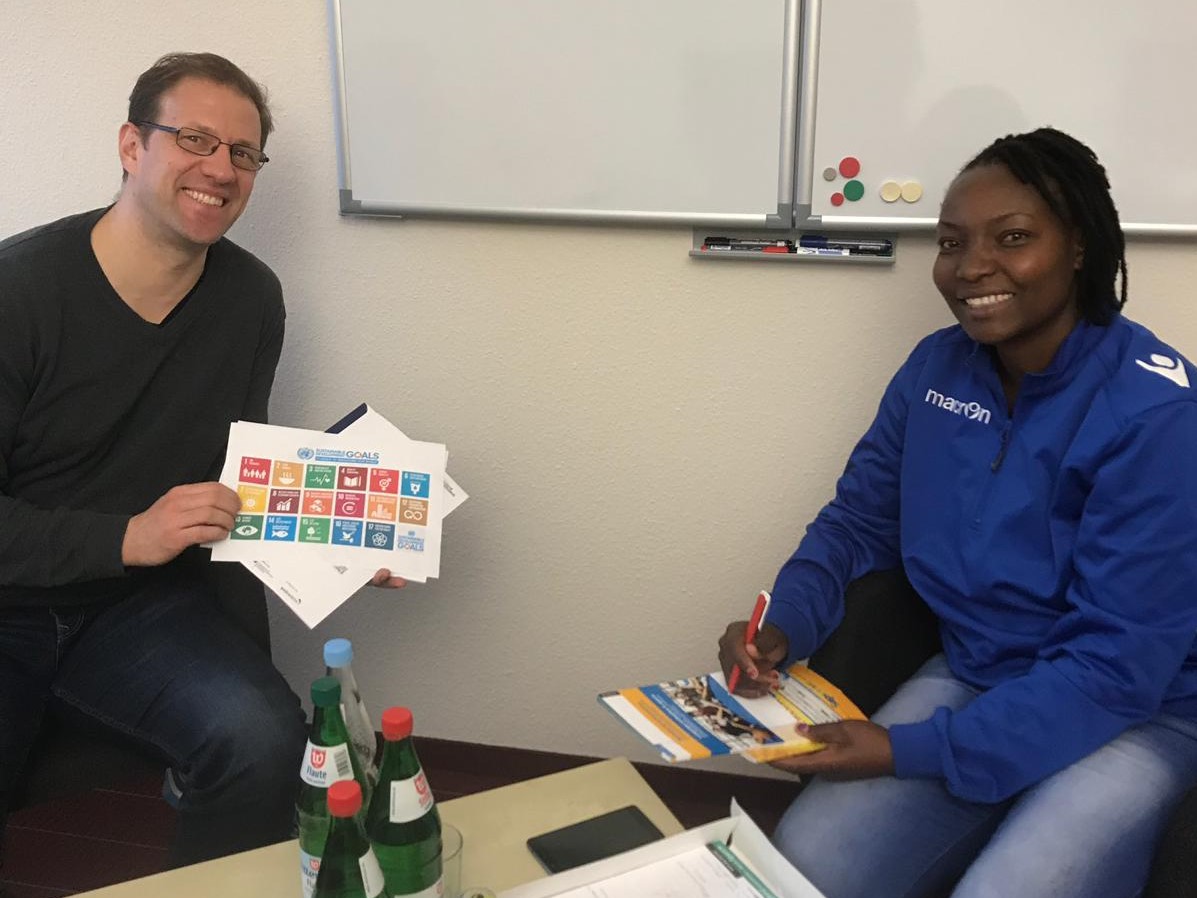 Picture:Frank from the Handballverband Schleswig-Holstein and Carol discussing a Youth Exchange Programme

By Martin Berger and Carol Nange

More in this category: Mid-term seminar with our weltwaerts-volunteers » Martin Berger inspires with handball in Kenya » Simon tells of his experiences as a volunteer in Juja » Kick-off-Weekend of the Trilateral Youth Coaches Exchange » Re-launch of the Weltwärts Volunteer Program in Kenya and South Africa. » #Teammateabend – great ideas for a team evening » Community Talk with Mike from Pendo Amani in Juja, Kenya » Handball is growing in Kisumu County – 17 teams at first county tournament in by EmpowerGirlsPlus » Play Handball Corona Aid helps over 1000 people in South Africa and Kenya. » Update PHKE: In every challenge there is always something we can do as a sport for development organisation » “Wild Boys” goes “Play Handball” » Léon reports from his experience as volunteer by our partner organisation Empower Gils Plus in Kisumu, Kenia » Jasper is one of the first volunteers in Kenya and reports from his experience » PendoAmani in Kenya & PLAY HANDBALL initiate Handball After School Program » Play Handball Volunteer Programme extends to Kenya » Supercup inspires over 450 children in Africa » Interview with Anja Althaus: A matter of the heart with two “crazy chickens” » Karibu Kenya! Play Handball Supercup in Kisumu » Handball for UNSDG13 Climate Action – Workshop & Clean-Up » PLAY HANDBALL starts in Kenya in 2017 »
Previous Post Hanna reports from her experiences in 2 different communities around Cape Town
Next Post Sport unites Jordanian and Syrian children with and without physical disabilities